Salewa is at home, working on her laptop.
Maami walks into the living room and asks how Jared is doing.
Salewa says he's old news.
Maami asks if she's not in any relationship.
Salewa asks why.
Maami says after school, what happens?
Salewa says marriage is not in her plans for now.
Maami tells her to reconcile with Jared as he's a good boy. 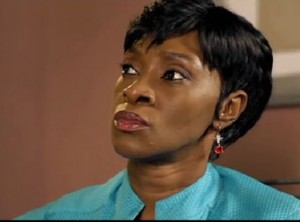 
Ivie comes to see Freddie.
He complains about having to go to university in Nigeria where everyone knows his family name and will make fun of him.
She tells him to talk to Salewa and find out how she's handling it.

Freddie places a call to Salewa


Charles is having a meeting with his team.
A staff asks if they need to create content just for Alexis.
Charles says Phoenix Prime might do that for them as they gave shown interest and they just have to wait and see how much they are offering.


Freddie comes to see Salewa, to ask how she deals with being an Ade-Williams in the university.
Salewa says a few people ask her when they hear stories.
She tells him that a university is a big place so he might not even hear anything and if he does, he wouldn't care.


Helen comes to see her project supervisor.
She apologises for the misunderstanding and hands her a copy of the review she has done.
The supervisor is impressed.


Freddie calls Nero to ask if they could see.
Nero says he's on his way to him as he was actually about to step out.


Sheila walks into the living room all dressed up.
She asks Freddie what's going on.
Freddie says he called Nero because he wants to see him.
Sheila asks why and says she won't put up with any of his tricks.
Freddie says he will be in his room till Nero arrives.


Charles asks Nnenna if she can give him tips that can help him as Brenda is coming over to negotiate a deal.
Nnenna says Brenda is ruthless and generally gets what she wants and would do anything to avoid compromising her standards.
Charles says she is the egomaniac he has always known and he will just make her feel like she's in charge.


Brenda gets a call from Charles.
He asks when they can meet and talk.
Brenda says whenever he's ready, she's at her office.


Nero is at Sheila's.
Sheila complains about Freddie.
Nero tells her to have faith in him.

Freddie comes into the living room and tells them he will take their advice and attend a Nigerian university.
Nero looks at Shela and gloats.
Sheila apologises to Freddie and says she just wants the best for him.


Ene brings her food to Ziggy’s.
Frank asks how long she will continue to do that.
Ene says the power situation is indefinite.
Frank tells her to get a big generator.
She says she can't afford it.
He tells her to take part in the 'Give to Get' scheme.
She warns him never to mention it to her again.

She goes to Obiora.
He looks uneasy as he tells her he's sorry but this has to be the last time she puts her food in the freezer as if takes a lot of space and they are unable to put their drinks in.
She's disappointed but she says okay.


Charles comes to see Brenda at her office.
She tells him to explain Odyssey's interest in Alexis around the same time as Phoenix Prime.
He says coincidences do happen especially in business, same way Victoria started working for Phoenix Prime the same time she was supposed to start working for Odyssey.
Brenda says the prospect of working with Phoenix Prime was more exciting for her than Odyssey.
Charles says everyone has their preferences just like Alexis was more eager to sign with Odyssey than Phoenix Prime.
Brenda has no rebuttal.
Charles says they can decide to move forward instead of rehashing history about who did what.
Brenda agrees.
Charles says they have a common interest and they can at least agree to that but if they can't, he might as well just leave.
She studies him.


Nero tells Sheila that Freddie is a bright young man.
Sheila says she just worries as Freddie has grown so much.
Nero tells her to thank herself for that.
She says sometimes she thinks she may have ruined things with him.
He tells her to learn not to argue with him.
She chuckles.
He asks if he didn't say Freddie would come around.

He says it's time for him to head out.
She tells him to take care.
As he leaves, her phone rings and she sees it's a call from Amaka.
Sheila suddenly looks exhausted.
Episodes

Dogtanian and the Three Muskehounds (2021) (Animation)

Our Kind of People