Damini gives Bimpe an assignment and says he's going to the airport to pick up his brother.
Bimpe offers to go along.
He tells her to stay and finish the work.

She asks if he has food at home for his brother to eat.
He says they will stop at a restaurant and she can join them there.
Tony comes into the office.

Charles asks him if he's not having as much fun as he thought he would. 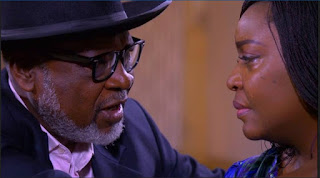 Tony says he wasn't told he would be a messenger.
Charles says the staff who come with no skills have to work their way up so he has to make do for now.

Tony thanks him.
Cleo is in Brenda's office.
Brenda says Soji's pilot is not as gripping as it ought to be.

Cleo says Soji had challenges.
Brenda says she sceptical but she likes the vibe of the show and where Soji's head is as a director
She says they will do the show.
Cleo thanks her.

The therapist says when Monica was held captive, she had imaginary friends and when she was told about her father's death, she has recreated him.

She says Monica might have to for come for more tests if she doesn't improve.
She advises Philip and Yaya to also take care of themselves as they could develop carer fatigue.
When the therapist leaves,

Philip checks on Monica in the room then returns to the living room to meet Yaya drinking.
He asks if she watches Monica closely when she takes her pills. 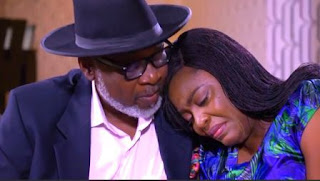 She asks if he's trying to call her a loser and say her work is not important.
He says he shouldn't have said that.
Yaya is still upset, she almost calls him a son of a bitch but she restrains herself.

He tells her to go ahead and call him that.
They argue some more, then Philip heads for the door and says he will come back when she feels
better.

He tells her to try not to get drunk.
Yaya says he's the biggest drunk in the Ade-Williams' family.
He leaves.

Monica comes out and asks Yaya to go with her for a walk.
Mimi is in Tessa's office.
Tessa is busy reading a story on her phone.
Mimi takes the phone from her and complains Tessa is ignoring her.

She looks at the story on the phone and it's regarding the Stephen-Sheila scandal.
Tessa brings up Yaya.
Mimi asks what Yaya has to do with Sheila's scandal.

Tessa says Yaya is evil and she wouldn't be surprised if she's behind it.
Mimi says because Tessa hates Yaya doesn't mean she's responsible for everything and the fact Tessa is still thinking about her, means Yaya is winning.

Shina comes to see Bimpe at work.
Bimpe tells him to come with her to go and meet Damini's brother. 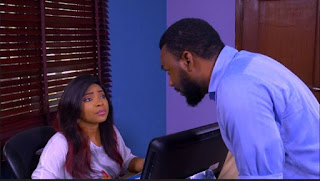 Shina asks why.
Bimpe says he might be his future brother in law and she wants Shina to show him around.
Freddie is in his room.
OT walks in.
He apologises and says he should be happy for Freddie.

Freddie shakes hands with him.
He suggests that OT finishes school.
OT says he has things to handle first.
Freddie says Cosmo might be able to help him.
OT laughs and says they should drink.
Freddie says he has a lingering headache and drinking makes it worse.

OT is about to drink alone but Freddie begs him not to so he doesn't also get tempted.
Sankey comes to Charles' office.

Sankey tells him all about Tony.
Charles is surprised that Tony is Fabian's boy.
Sankey warns him to keep an eye on Tony. 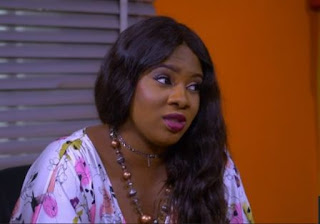 After Sankey leaves, Charles sends for Tony.
He asks if he works for Fabian.
Tony says yes but no more.
Charles asks if Sankey came to issue him a warning.

Yaya says it's just a habit.
They see two ladies approaching and Monica says the fishermen are coming.
She runs off.

Bimpe and Shina enter the Garden restaurant.
They see Damini's neither, Timi.
She asks for Damini.


Timi says he's not aware and his mother even gave him stuff for Bisola.
Damini joins them at the table.
Bimpe tells him it seems nobody in his family knows about her.


Damini tries to explain.
Shina says it's nonsense.
Bimpe agrees.
They leave.
Serena and Brenda's lawyer are back to have a meeting with Chief and his lawyer
Chief reads through the agreement Serena and
the lawyer prepared and he says he's not allowed to touch Serena on the date or mention Alexis.

He complains it's just an hour.
The lawyer says he has to stick to the conditions during the meeting.

Chief says they are dates and not meetings but he knows he can change Serena's mind as she knows he loves her.
He signs the agreement.

Serena signs too.
Amaka is at Dikibo's place, crying.
He returns home and impatiently asks her what the issue is.
She says it's nothing.

He sits beside her.
She says Monica accused her of trying to take her place in Fred's life and she thinks she really tried too hard.
Dikibo tells her Fred loved her.
She says she's always trying to get people to accept her

He holds her and says it's not true.
He tells her to look at him.He kisses her cheeks and then asks if she will come upstairs with him.
Subscribe to Youtube

E.L – Nobody Send You

Anders – Pray For The Day