Suresh greets his mother and sister.
His sister, Rashna, says she would be happy if he gets married as well.
Pragya tells him to go and freshen up so he can eat.
He asks about his folks and Pragya says they will stay with her and her family.
He asks if it's okay and Sanla says it's better for them since the wedding will take place at their wedding hall.

As Suresh is washing his face, Arvint urges him to tell Bulbul how he feels; since it was her plan to bring his folks to the house, she must be feeling the same thing he feels.

Suresh stands looking at Bulbul who has her back turned to him.
His mother sees him watching and thinks he's looking at Pragya who is staring at him.


Sanla shows Suresh's mother and sister to their room.
Sanla's friend who helps her in her business, has a daughter named Purvi, who is Bulbul's closest friend.
Purvi comes to visit and Sanla introduces her to Suresh's family.


Arvint tells Suresh to go and talk to Bulbul or he will tell his mother that he's in love with another girl.
Suresh is nervous.


Suresh's mother tells Sanla that she has finally figured it out; Suresh is in love with Pragya.
Sanla says she has also noticed but the two of them are too shy to tell one another how they feel. 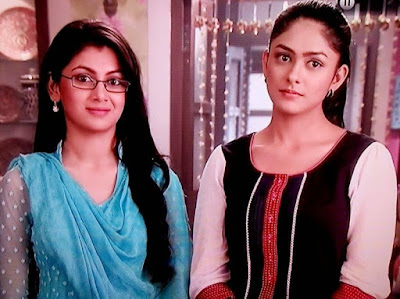 Suresh goes to Bulbul and gives her a rose flower.
She asks if he knows the meaning of it, then she laughs and says she knows it's meant for Pragya.
Suresh says that wasn't his plan.
Pragya walks into the kitchen and Bulbul gives her the rose, saying Suresh brought it for her..

Bulbuls leaves the kitchen and Pragya thanks Suresh for the rose.
Suresh is confused and can't tell her the truth.


Suresh's mother tells Sanla that she thinks they should plan Suresh and Pragya's wedding.
Bulbul rushes to them and says it's a good idea because Suresh just gave Pragya a red rose.
The mothers are happy.

Grandmother reads a story on her phone and announces that Abhi is about to get married and he will announce it on the news.

Bulbul and Purvi scream "Noo!!" and turn on the news.
Abhi announces on TV that his brother is getting married and he will rock his wedding.

Sanla says if Abhi is spending to much on his cousin's wedding, one can only imagine how much he will spend on his.


Abhi and his brother who also acts as his manager,Purab, arrive at the house where the engagement is being held.
Abhi greets his uncle, Akash and his fiancée , then he walks away to greet his grandmother upstairs.


His grandmother says she kept some food for him because she knows he won't want to eat downstairs.
She brings the issue of marriage up again and Abhi is not interested.
She tells him that he needs someone to stand by his side and complete him.
Abhi says marriages don't last anymore.
Purab comes upstairs and they start eating grandmothers food from the same plate.

Grandmother remembers when the boys were younger and used to eat from the same plate.
She tells Purab to talk to Abhi because when he gets married, Abhi will be all alone
Abhi says when one has money, he's never alone.

Suresh tells Pragya that his sister was never interested in marriage in the past.
Pragya says she has decided she will never get involved in an arranged marriage; she will marry the guy she loves.
Suresh asks if she loves someone.
She says she does, then she asks him the same question.
Suresh admits he also loves someone.
Pragys asks him who it is and he tells her to say hers first.
She says she will tell him later.
He says the same thing.


Grandmother continues to disturb Abhi and he finally agrees he will get married. He says he won't marry for love; he will marry someone like him who loves money and who will love him.


Sanla is sitting outside the house with her friends, Suresh's mother, Grandmother, Rashna, Purvi and Bulbul.
She tells them that in 3 days time, the stars will align and people can make a wish it and it will come true.
Bulbul says they have to make Suresh and Pragya come together and tell each other how they feel, so they can take advantage of the stars aligning.
Everyone agrees to go along with the plan.
Bulbul calls it 'Operation lovebirds'.


Abhi is driving with Purab in the car.
Purab tells Abhi that their grandmother worries about him a lot and has to take some pills before she can sleep at night.
Abhi asks if he's telling him to get married because of that.
Purab says he wants Abhi to get married and settle down.
Abhi asks about him and says he already told him to stop working for him and concentrate on his own thing.
Purab says he promised their grandmother that he will take care of Abhi, so he can't leave Abhi till he knows he's in capable hands. He says he is trying to find someone to manage Abhi's affairs and until he finds the right person, he won't leave.


Suresh tells Arvint that Pragya loves someone too and when he tells her about Bulbul, she will be happy for him.
Arvint is not so sure. He tells Suresh to let Bulbul know how he feels so that both sisters don't start liking him.
Suresh agrees to tell Bulbul tomorrow.


Purab is also out on the town, very close to where Purvi and Bulbul are standing.
He gets a phone call from his aunt informing him about the candidate he shortlisted for an interview, she wants to know if she should call the lady.
Purab says he will call her himself.


Bulbul shows Purvi a shooting star and both of them make wishes.
Purvi asks Bulbul what she wished for.
Bulbul says she wished to see Mr. Right and when she sees him, her heart will start beating.


She immediately receives a call from Purab inviting her for an interview tomorrow.
After the call, she tells Purvi that he sounded really nice.


A girl meets Purab and complains he's been avoiding her and she's been trying to get in touch with Abhi.
Purab tells her to stop stalking Abhi because Abhi will not marry someone like her, he will marry someone who will fall in love with him.
She keeps begging him that she's in love with Abhi and needs to see him.
He keeps telling her no and walking away from her but she runs after him, pleading.
He gets upset and shouts at her to get lost.

Bulbul and Purvi see him as he is shouting at the lady .
Bulbul gets is upset and complains to Purvi that he's so rude to the lady. She prays that her man is nothing like him.


Abhi meets the lady he's been secretly dating, Tarun, at a bar and she asks how he knew she was there.
Abhi says he knows people.
He tells her that Purab was saying they should get married.
Both of them laugh and Tarun says it's not like they will get married because she has 5 contracts and if her clients hear she's getting married to him, she will lose her contracts.


In the morning, Rashna tells Bulbul that they should start operation lovebirds.

Suresh comes to the house. He remembers going to purchase a diamond ring with Arvint.


Bulbul tells Pragya to go and get ready, then she tells Rashna that their plan is coming into play.


Bulbul and Rasha go to meet their mothers and Grandmother .
Rashna announces to them that Suresh bought a ring to give to Pragya, so they all need to hide so he doesn't get nervous and give it to someone else like he did with the flower.

They all hide and Suresh enters the house.
Pragya sees him he hides his hand behind his back.
Pragya asks what he is hiding.
He says it's a ring and she asks to see it.
he shows it to her and she says it's beautiful; whoever it's for, is lucky.
She asks him who he got it for.
He sees Bulbul and takes the ring from Pragya, then points at Bulbul.

Bulbul opens her mouth in shock then she tells the others that she told them he would point to someone else.
Suresh tells Bulbul that he was asking Pragya if she liked the ring but if Bulbul doesn't like it, he will return it to the jeweler.
Bulbul asks if the ring is her size and tries it.
She complains that it's not her size, so she puts it on Pragya and it fits.
Suresh says he bought it for Bulbul.
Bulbul says he bought her a ring in Pragya's size.
Suresh says they can share the ring in that case.
Bulbul says she never liked him but now she see him differently and diamonds are a girls best friend.

Suresh leaves and the other come out of hiding.
Pragya gives the ring to Bulbul but Bulbul refuses to collect it, saying it belongs to Pragya.

Suresh meets Arvint outside and explains what happened to him.
Arvint says he proposed to Bulbul on front of her sister.
Suresh says he did and also won her heart.
They get on the scooter but Suresh sees something and get off.


Bulbul and Pragya argue about who the ring is for.
Bulbul assures Pragya that Suresh loves her.


Suresh stops a man and calls him a thief.
He and Arvint hold him and Suresh opens the man's bag to reveal he stole cables.

Suresh sees them and tells the thief that he's a happy man today because the girl he loves has accepted his ring, so the thief can go with a warning.

The wedding plans are on the way.

Sanla tells Suresh's mother that there is still some distance between Suresh and Pragya and they need to do something.

Purvi's mother gives Pragya a broom and tells her to clean the ceiling. She makes her climb a stool, then begs Suresh to hold the stool.
The stool shakes and everyone holds their breath, expecting Pragya to fall into Suresh's arms but it balances again and they are disappointed.


Suresh tells Rashna to help him with the flowers but she deliberately let's them fall, so the flowers rain on Pragya who is sitting on the floor.
Suresh bends to help pick up the flowers.
Pragya looks at him and wonders why he has given her a ring and hasn't proposed.
She decides that she will propose to him herself, if he doesn't propose by tomorrow.
Subscribe to Youtube

My I.T Sexcapades
20 hours ago

My life as A Sex slave [completed]
1 day ago

Lil Wayne Feat. Raekwon - More To The Story
8 hours ago

Swae Lee - Dance Like No One's Watching (Video)
7 hours ago

Flower of Evil (Korean)
2 hours ago

The School Nurse Files
4 hours ago